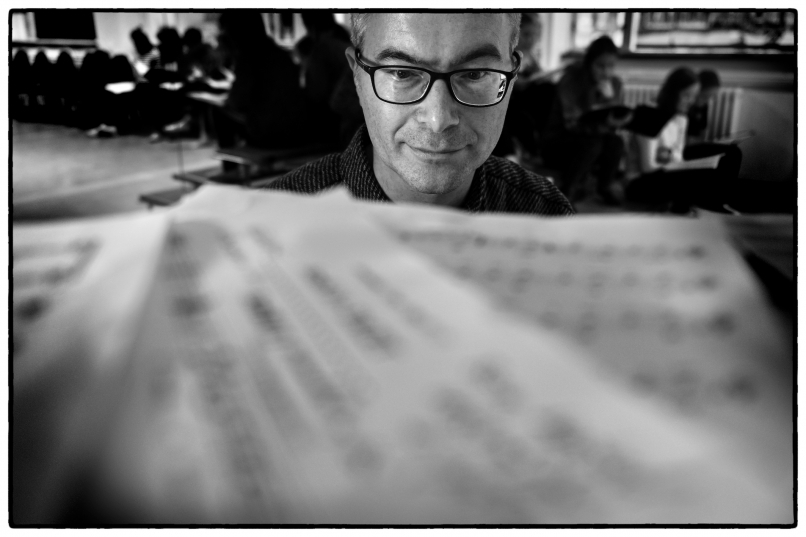 | OBJECT OF TERROR | 2000 (Casa Ricordi) fl , ob , cl , bn , hrn , tpt , tbn , perc , pno , 2 vn , vla. vc. cb. 15’30’’
percussion
1 performer
suggested setup: two sets
set A: triangle (medium-big) prepared with a set of rings, brake drum, metal spring, tubular bells (c’, e’, g sharp’)
3 cymbals (small, medium sizzle cymbal, big) bass drum.
Set B: vibraphone (with 2 bows), 6 cencerros, deep gong (deep f sharp) (or medium-big tam tam)
comment
Object of Terror was written on commission from the Caput Ensemble and Reykjavík 2000.
The idea of musical material has gradually been dissolving in my works. At present we may say that the harmonic and rhythmic basis which generate the events lay deep under the surface, mostly unpronounced, but a distorted, elusive or compressed image of them permeats the surface. The most important thing is the evolution itself, how the foreground changes without anytime reaching a secure affirmation of themes, chords or rhytmical ideas. The form is quite foreseeable, unavoidable, and from that point of view this is among my most simple pieces. This is done so as the form will not bear any message in itself but point all the attention to the metamorphoses itself, to the colour and fragrance of time that passes, to the relation of creation and distruction which has long interested me.
main performances
Reykjavík, September 2000, (The Caput Ensemble)
Reykjavík, November 2000, (same)
Bologna, November, 2000: (same) Mappe musicali
Prague, November, 2000 : (same) Music Marathon
Amsterdam, June 2001: (same) The Holland Festival
Bologna, October 2002, (FontanaMIX) Bologna Festival
Berlin, December 2002 (The Caput Ensemble)